The WISERD funded biomapping research project (led by Professor Chris Taylor (WISERD) and Dr Jon Anderson (CPLAN)) ‘stress-tested’ the BBC presenter Nicholas Crane for the forthcoming series of the popular television programme ‘Coast’. The research project uses ‘qsensor’ technology to quantify the affect of the built, natural, and social environment on the human body. Dr Jon Anderson met with the BBC team in London and carried out a series of ‘stress tests’ which sought to measuring the electro dermal activity (or nervous energy) of the skin, these included walking in the city, cycling a Boris-bike around Trafalgar Square, and negotiating the Underground system. These results were compared to an early evening walk along the sands at Southend on Sea. 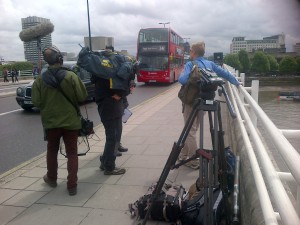 The results were broadcast on 9 July 2015, in the first programme of series 10 of Coast. The broadcast can be found here.

In August 2012, to coincide with the Cultural Olympiad, I joined forces with the Royal Geographical Society’s Dr Jenny Lunn for a walk around Cardiff, connecting its landmarks with the many countries competing in the Olympic Games. This project was part of the RGS’s ‘Walk the World‘ project, and was recorded by BBC Radio Wales. Here is the recording.

There follows a number of links to the presentations given at the Royal Geographical Society / Institute of British Geographers Conference in Kensington Gore, London, September 2011.

A number of media interviews were also conducted on these projects. The following is a radio interview with BBC World Service (31 Aug, 2011)

Press releases for these projects can be found here: